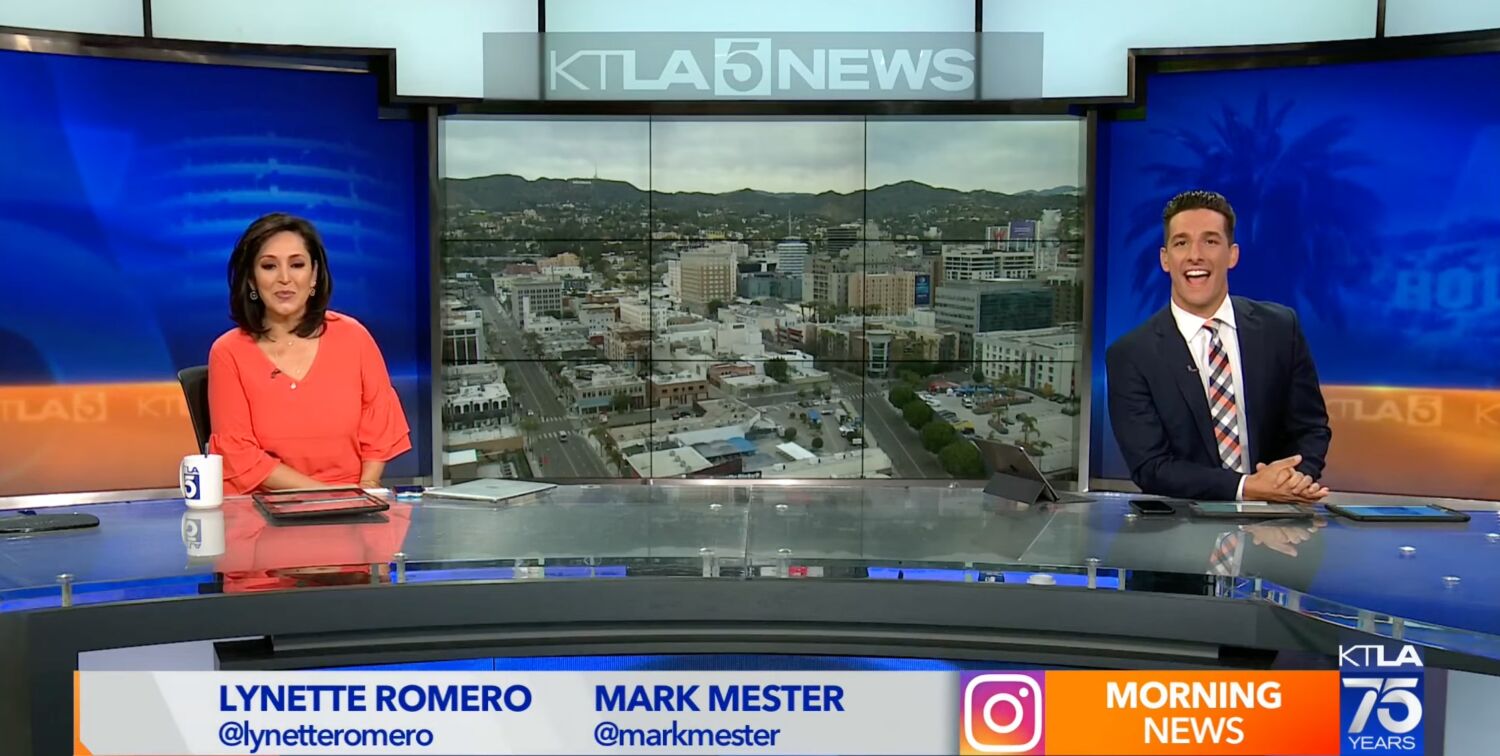 KTLA-TV Channel 5 fired information anchor Mark Mester Thursday afternoon, days after he was suspended following an off-script phase during which he criticized the station’s dealing with of his co-anchor Lynette Romero’s abrupt departure, in response to a number of staff on the station.

The station’s basic supervisor, Janene Drafs, introduced the firing with a quick speech throughout a gathering within the newsroom round 1:15 p.m., saying, “[Mester] is no longer at KTLA5,” staffers who were present for the announcement told The Times Thursday.

The KTLA website no longer lists Mester on its roster of reporters and anchors.

Last week, KTLA announced that Romero, a longtime anchor of its popular weekend morning show, had left the station without saying goodbye to viewers, drawing wide outrage and criticism.

“After nearly 24 years, Lynette Romero, our friend Lynette, has decided to move on from anchoring our weekend morning news,” Pete Saiers, the station’s news director, wrote in a statement that was read by entertainment reporter Sam Rubin during a Sept. 14 segment.

“KTLA management had hoped she would stay here her entire career, and KTLA worked hard to make that happen,” Rubin added. “But Lynette has decided to move to another opportunity elsewhere. Lynette, we wish you luck, we miss you and we thank you for everything you’ve done for KTLA. … On behalf of everyone here, we wish you and your family nothing but the best.”

Saiers later said that management had hoped Romero would record a farewell message to viewers, but she declined.

According to station sources who asked to remain anonymous, Romero no longer wanted to work weekends and had asked management to allow her to work a weekday anchor shift so she could spend more time with her family, but she was told there were no openings. She reportedly has been hired at KNBC-TV, L.A.’s NBC affiliate, as one of its weekday morning show anchors, sources said.

Romero did not immediately respond to The Times’ request for comment.

During Saturday’s weekend morning show, Mester, Romero’s co-anchor, went off script with an emotional speech. He apologized, on behalf of the station, to viewers and said the handling of Romero’s exit “was rude, it was cruel, it was inappropriate and we are so sorry.”

He then apologized to Romero, whom he called “his best friend.”

“You did not deserve this, it was a mistake, and we hope you can find it in your heart to forgive us,” Mester said, his voice cracking at times, in a monologue that lasted more than four minutes alongside three of his colleagues.

Many viewers had applauded Mester’s ad-libbed message, but not long after his defense of Romero, Mester was suspended, drawing even more criticism of how KTLA handled the situation.

“Mark was 100% in the right,” tweeted one user. “It’s like you guys are begging to lose all your viewers with this kind of behavior.”

However, newsroom employees described a different scenario, saying Mester, who joined KTLA in 2014, had violated their trust.

Staffers said producers had written a script for Mester to read to send off Romero, accompanied by photos and clips of her broadcasts, which Mester ignored during the segment. He had also hired a plane with a banner to fly over the station with the message “We love you Lynette.” Mester had pitched producers to include footage of the plane in the segment but was rejected.

Staffers said they saw Mester pacing back and forth with an angry look prior to stepping on set for the Saturday segment. He had alerted his social media followers that he was planning to address Romero’s departure on that morning’s show.

After his segment, people in the newsroom said, they saw Mester ignore management’s requests to step into their office for a meeting. At one point, several staffers recalled Mester telling one of the news directors to “shut up” and said he refused to leave the building after being asked to do so.

During the exchange with management, Mester allegedly yelled obscenities that could be heard by other staffers in the newsroom.

Mester did not immediately respond to The Times’ requests for comment Thursday.

Several sources at the station said it was common knowledge that staffers were concerned about Mester’s temper and what was described as his “disrespectful” behavior to women and had complained to management.

“You would not believe the temper tantrums and the weird things that set him off,” said one longtime newsroom employee. “You’re constantly afraid you’re going to say the wrong thing.”

A longtime anchor at the station said he hoped viewers would separate Romero’s choice to leave from Mester’s behavior, which they called “unprofessional” and “reckless.”

“It was supposed to be shown over a script that was warm, loving and appreciative. It was awesome, and [Romero] would’ve loved that,” the anchor said of the goodbye piece that producers had prepared. “Mark hijacked that and made it about him.”

Veteran journalists at KTLA said it is common practice for newsroom managers not to give airtime to talent leaving for a competitor station.

“Our industry has a practice of quickly and quietly releasing team members who move to the competition,” Ashley Regan, a producer for KTLA’s “Weekend Morning News” show, wrote in a statement posted to Twitter following Mester’s outburst. “We may not love the practice, but we know not to take it personally.”

Romero joined KTLA in 1998 and won multiple local Emmy Awards, including one in 2006 for her reporting on the Latino community. She was co-anchor of “KTLA Prime-News” and later co-anchored “KTLA Weekend Morning News,” which has been among the most-watched weekend morning news shows in Southern California.

For years, she co-anchored with Chris Burrous, who died in 2018 of a methamphetamine overdose. Since then, Romero took the lead of the show, alongside Mester.

Romero has kept a low profile on social media since her KTLA exit, but she addressed fans Sept. 14.

“I will always be grateful for the love and affection LA viewers have given me,” she tweeted. “Stay tuned my friends I’ll be right back.”

On Sept. 17, Romero expressed her gratitude and shared a tweet from actor Holly Robinson Peete, the former co-host of CBS’ “The Talk,” who was fired in 2011 after just one season on the daytime talk show.

“As someone who got no proper goodbye or even an acknowledgement of my departure many years ago on the talk,” Peete responded to Romero’s tweet, “I feel the disrespect and wish you the absolute best can’t wait to see what is next!”